One day, Mary Zebedee said to the Lord Jesus Christ,

"Sir, when you are crowned King and on the throne, may my two boys,
James and John, be appointed to rule on either side of you?"

"That appointment my Father will make himself," said Jesus.

Mary had reason to seek preferment for her sons. Jesus had only to speak once and they followed Him immediately. He took them everywhere when he healed St. Peter's mother-in-law, at the raising of Jairus's daughter, and together with St. Peter to witness the Transfiguration.

In the Acts of the Holy Apostles we read that King Herod Agippa had James murdered - or martyred if you prefer. His body was put on a ship and cast off, when it drifted all the way to Spain, where he had done incredible missionary work. God revealed his grave in AD 800 and his body was taken to Compostela one of the most famous places of pilgrimage. In AD 939, the Moors attacked and demanded a yearly ransom of one hundred virgins. St. James appeared to King Ramirez, first in a dream and on the day of battle, mounted on a white horse wavmg a white standard, and the Christians were saved and victorious. His symbols are a pilgrim's staff and scallop-shells. 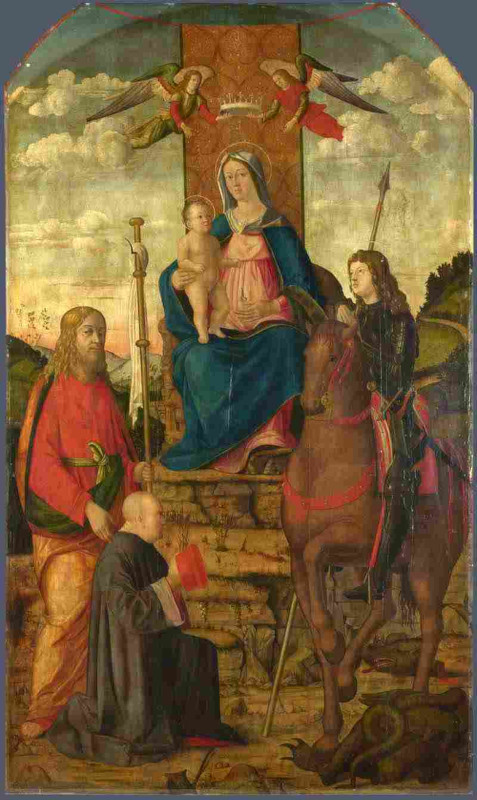 The full title of this picture, purchased by the National Gallery in 1867 is 'Altar piece: the Virgin and Child with St. George and St. James the Greater and a Donor.

St. James the Greater is on the left, introducing the donor, whilst St. George is shown as a knight on horseback. James is the patron saint of Spain and is most often represented with a pilgrim's staff and broad-brimmed hat, as well as a gourd for carrying water and a scallop shell. The shell is worn by pilgrims to Compostela.

The maiden was chained to the rock. The dragon, breathing fire and poisonous gas, scrunched nearer, his jaws opening like a cave, his fearful teeth putrid. St. George, Tribune of the Emperor Diocletian, proven in battle, totally converted Christian, drew his sword with left, mailed hand, and the cross at the handle brilliantly reflected the sun. In his right hand was his trusted lance. "Flee, or die," cried the maiden. "I will save," called St. George, "both you and the city." He cantered and galloped and his lance pierced the dragon's jaw. They dragged the beast to the city. The king offered great reward, but St. George begged him to believe in the Lord and to be baptised. The king and fifteen thousand of his men, and their wives and children, were baptised that day. The king pledged himself to feed the poor, support the priests and build churches for the faithful

To start the account again - the dragon has poisoned the air of the city so that no one could get near, it had taken for food every sheep and oxen and the people were feeding it their own children, chosen by lot and the lot had fallen on the princess. As far as St. George was concerned, he was rich and brave and sought to protect his fellow Christians, but Diocletian would have none of it and St. George was on his way to martyrdom - he was tortured and killed, but as so often, the blood of the saints was seed of the Church. The body was returned to Lydda, his native town. The Crusaders were greatly inspired by the account of his love of the poor to whom he had distributed all his wealth before surrendering to the Emperor, and by the account of his battle against the dragon, which spoke to them of the battle between St. Michael and the devil. England chose him for Patron Saint, as did soldiers and sailors and the City of Ga-loa. The Church honours his memory on the 23rd April.

Paola Uccello [c. 1397-1475] Italian painter, active in Florence and celebrated use of perspective. His works include St.George and the Dragon [c1460], now in the National Gallery in London. His most famous work is a series of 3 paintings of the Battle of Romano [c1455] painted for the Medici Family. 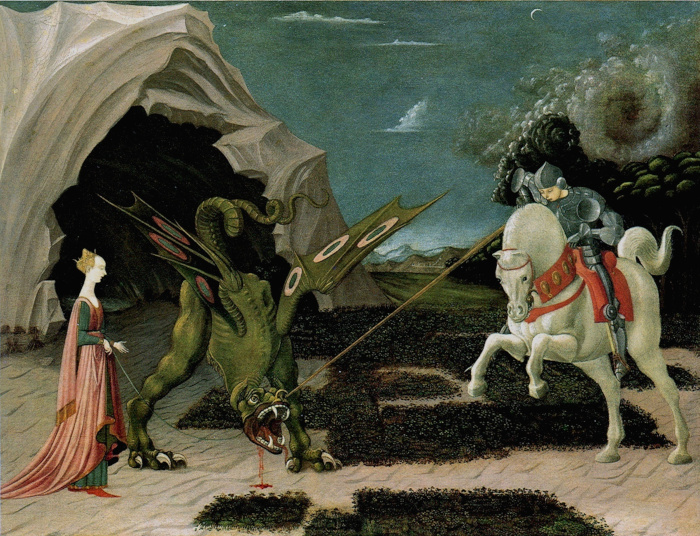 Raphael [1483-1520] Italian painter and architect. From 1504 to 1508, Raphael lived mainly in Florence where his work became more sophisticated under the influence of Leonardo and Michaelangelo. In 1508 Pope Julius Il called him to Rome where he remained until his premature death at the age of 37.

Following the success of his prestigious papal commission the fresco decoration of a series of rooms in the Vatican, Raphael was in such demand that he was probably aided by a team of assistants. 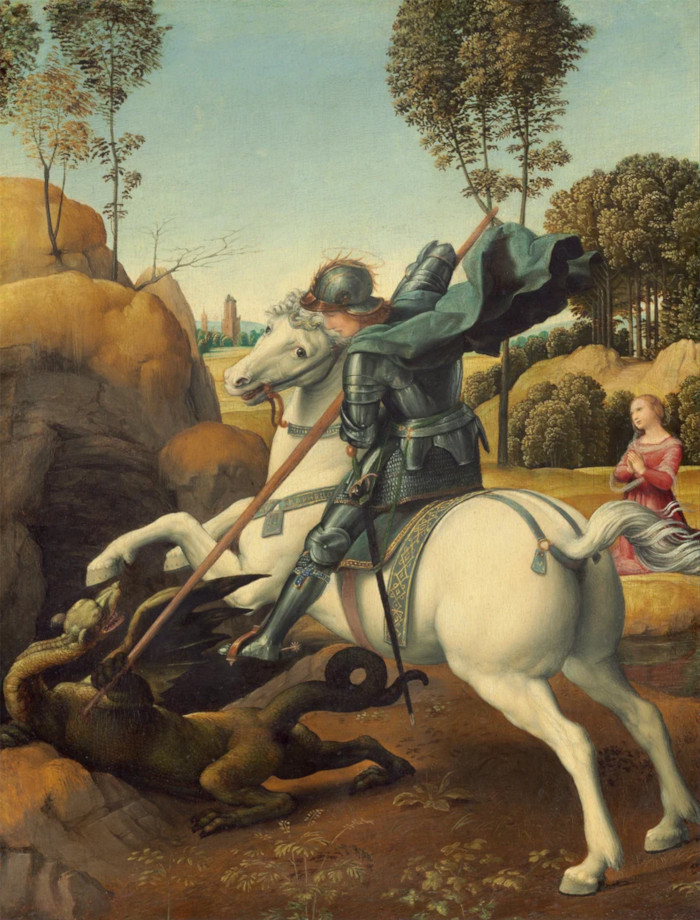 Many churches are dedicated to St. Sebastian and many more churches show stained glass windows in his memory. He lived in the 3rd Century and his faith in Our Lord Jesus Christ was totally unconditional.

He was a professional soldier in the reign of Diocletian. The time came when persecution was ordered again and this persecution was as merciless as the persecution of the Jews under the Nazis. Sebastian heard that Marcus and Marcellinius had been arrested by the Prefect Nicostratus and handed over to the Jailer Claudius for proclaiming the Faith. He went to Nicostratus and Claudius and put forward our Faith and the change that Christianity brings about in the lives of the converted. He spoke so powerfully, filled by God the Holy Ghost, that not only the Prefect and Jailer were persuaded, but sixteen others also, and the Christians were released.

Sebastian proved himself an excellent soldier and was promoted to the Praetorian Guard. Then Diocletian heard that Sebastian spoke for Christians time and again, and ordered that the archers execute him [it is this that is depicted in the churches]. Sebastian survived, appealed to and rebuked the Emperor who came to visit him; and the bodyguards then clubbed him to death. When the plague raged, many sought his intercession and were healed. His symbol, of course, is the Arrow 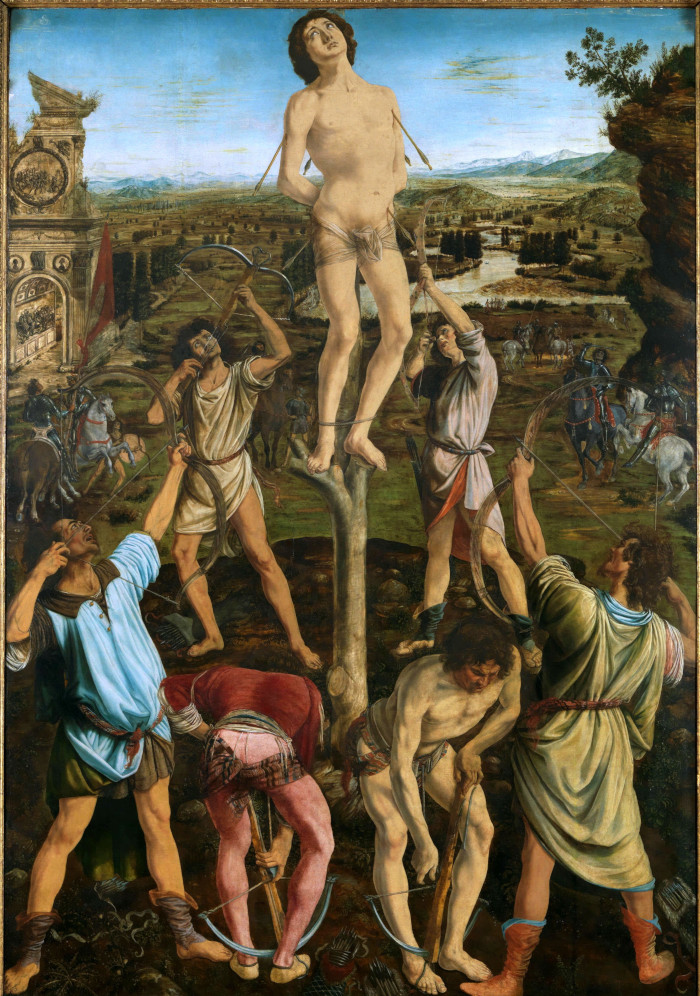 Antonio del Pollaiuolo [c1432-98] and his brother, Piero [1441961 were painters, sculptors, goldsmiths, engravers and designers, active in Florence in the 15th Century. Antonio is thought to be the more accomplished and the first Renaissance artist to make a serious study of anatomy.

The Martyrdom of St. Sebastian [1475] in the National Gallery in London, is considered a joint work and was commissioned as the altarpiece of the Oratory of St. Sebastian built by the Pucci family in SS Annunziata, one of the most important churches in Florence.

I have been offered the opportunity to record lives of the Saints. The Church of West and East lists several Saints for every day of the year. For many Christians, this is a living part of the Church: we love them, they love us my choice is a very personal thing.

On 26th December we celebrate the Feast of St. Stephen. After the Ascension, the church grew at such a rate that the Apostles created the Order of Deacons and St. Stephen was their first choice. He had much grace, great power to miracles and show signs. Ile the Lord Jesus Christ as God and Saviour. Famous Jews from many parts of the Middle East objected to this teaching, but could not defeat him in debate. So they accused of blasphemy in respect of his exposition of the place of Moses, the Law of Moses and the significance of the temple. In court he preached a powerful sermon after the manner of St. Peter. He was condemned to death by stoning and immediately was granted a clear vision of Our Lord Jesus Christ in heaven. They stoned him to death: and in the hour of his death he offered two prayers used by many generations of Christians since - 'Lord Jesus, receive my spirit' and 'Lord, do not hold this sin against them'

The Martyrdom of St. Stephen attributed to Antonio Carracci [c1610]. Saul [later St. Paul] guards the clothes of those who stone St. Stephen outside the city [Acts of the Apostles 758-60]. 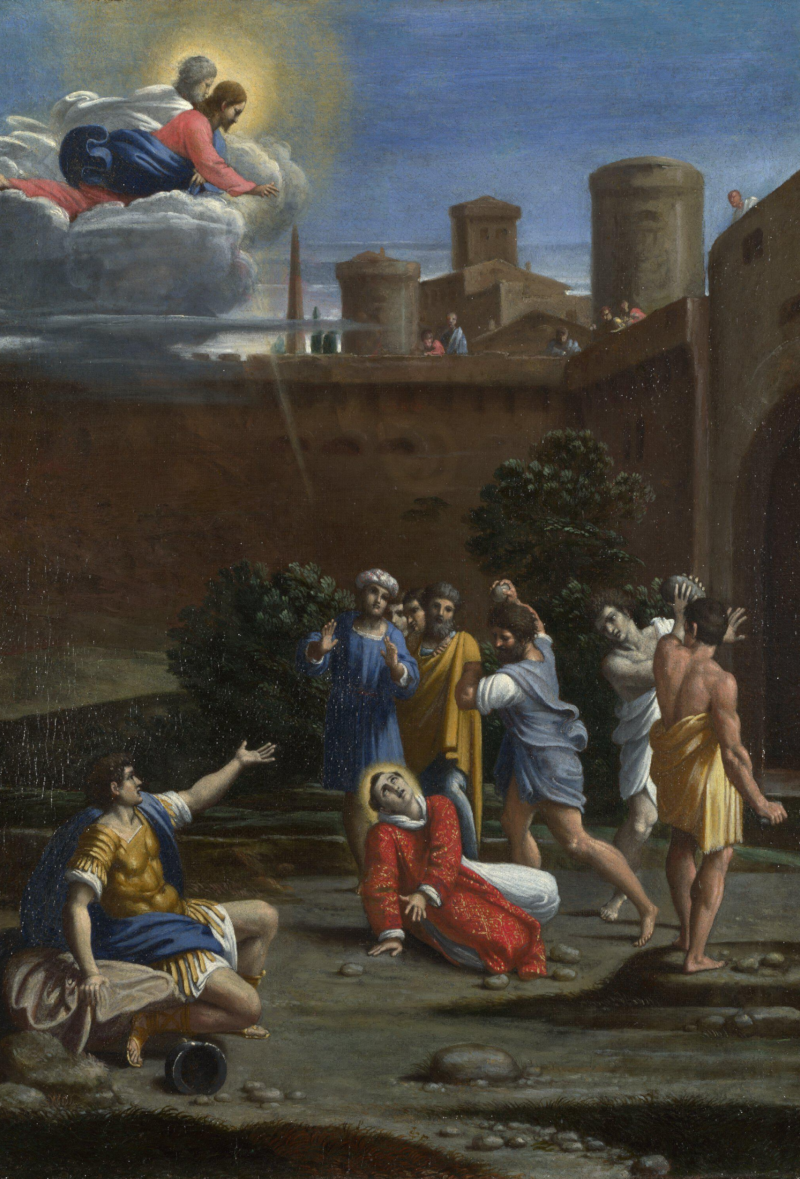 Antonio Carracci was a member of the Italian family of painters whose forte was the painting of elaborate murals in the Farnese Palace and other palaces and churches in Rome in the late C 16th and early C 17th.